Britain Explained is designed to help you:

Britain Explained is a resident’s guide to England, Scotland and Wales that offers simple answers to over 700 of the most common questions. It has been created with help from a whole community of kind and generous people.

I first had the idea several years ago. I became friends with a family from Finland who had just moved to the UK. One day they asked me why there were no signs to the railway station in the town. I was confused. I knew there were lots of signs, like this one: But talking to them, I realised that although most British people know this logo means ‘railway station’, it is not an international standard. It was devised in the 1960s for the British national rail network. To people from other countries, it is therefore meaningless. Britain has towns covered in meaningless signs!

Just look at this photo of a genuine road sign below. You might reasonably expect to turn left if you wanted the railway station, but you actually need to turn right. This is because the brown train logo is showing the way to a tourist attraction: 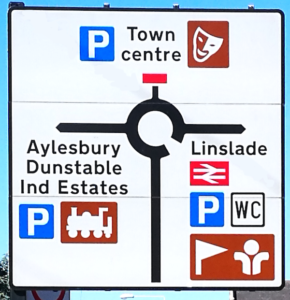 Of course, it is not only people from abroad who find things confusing. A residents’ guide to Britain would be useful for British nationals too. I therefore decided to create a simple and straightforward resource that anyone could use. I scribbled some ideas down on a piece of paper and thought it wouldn’t take too long to cover the main points. This was hopelessly optimistic. It took me 5 years and the generosity of a large number of people. Over that time it has been improved and refined many times, until it became what is here today. Thank you to everyone who took the time to read, suggest, amend and encourage.

As I discovered, a project like this takes a long time. For years I have observed, questioned and collected.

Although I have always lived in the UK, I am half Danish, which helps me notice cultural differences. Some of my writing comes from personal experience, but I have also asked many people from the UK and abroad about their own experiences. I have researched official websites and read surveys, books, magazines and newspapers. I’ve absorbed details from public information posters and leaflets. Where possible, I’ve had facts checked by professionals in each subject area. However, please remember this website is just a friendly guide – it is not legal advice and you should contact a specialist before making any decisions (please see the Terms of Use for more information).

I know that despite my best intentions, I will have missed things out or made errors. I welcome contributions to help keep the site correct and up to date. Please get in touch if there is anything you think needs to be added or amended (or you just want to say hello!).

Buy me a coffee!

Britain Explained is a free resource, but obviously it costs money to develop and run. If you’ve enjoyed using the site and would like to help support it, I’d be really grateful for a ‘virtual cup of coffee’. You can donate a small amount and all the money goes towards running the site – and occasionally a cup of actual coffee! Thank you. It means a lot to have your support.

Buy me a coffee

In creating this website, I read these books for history and context. Some of these are specifically about the English. While there are some differences among the Scottish and Welsh, I believe that in many situations we’re pretty similar.

For advice and suggestions, my thanks go to S Root, C Thompson, G Townson, T Mbariti, Ruth & Garry Jones, Katharine S, Khalil S, Hazel F, Maggie Trevelyan, Anthony Lewis. Michelle Clare gets a special mention for support, subbing and contributions. And a massive thank you to the team at Aubergine for their time and enthusiasm to make the site look so good and work so well. Despite my best efforts, there may still be mistakes – please let me know so they can be amended.