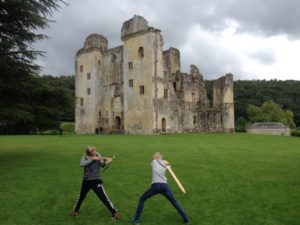 This is a very quick explanation of the British history that you are most likely to hear about or read about, which is good as a general overview. To keep things simple, it does not include colonial or overseas history.

2500BCE: Stonehenge was built. It is a circle of large stones in Wiltshire that you can still visit today.

43: The Romans invaded. The Roman invasion was led by Emperor Claudius. The Romans built roads and towns across England (every town with a name ending in ‘cester’, ‘caster’ or ‘chester’ is from Roman times, including Manchester, Winchester and Doncaster).

60: Boudicca, queen of a tribe in east England, fought the Romans. Over 2 years they destroyed 3 cities, until she was captured.

597: Christianity became popular in Anglo-Saxon kingdoms. Celtic areas had their own version.

793: Vikings from Scandinavia arrived. Within 100 years the Vikings controlled much of central and north-eastern England, an area called the Danelaw.

925: King Athelstan crowned. He was the first to be king of the area we now call England.

1066: The Norman Conquest. William, Duke of Normandy, beat King Harold II at the Battle of Hastings. His Norman armies invaded England and most of Wales. William was known as ‘William the Conqueror’, or King William I.

1086: The Domesday Book. King William I created the Domesday Book, a very detailed record of everyone who owned land or animals. This was so he could tax them. The book still exists.

1135: The Anarchy. After King Henry I died, there was a brutal civil war for 19 years. This was because two people wanted the English crown: Henry’s daughter Matilda, and his nephew Stephen of Blois. Eventually Stephen won.

1171: England invaded Ireland. After the invasion, England ruled the island of Ireland for over 700 years. Although there was some mixing of the English and Irish populations, mostly they lived side by side.

1215: King John forced to sign the Magna Carta. King John was a bad king. His lords became angry and made him sign a document (the Magna Carta) that said he must follow the rules of England. It also limited how much the lords could be taxed and gave ‘free men’ the right to a fair trial. This idea of human rights was copied across the world.

1284: England took control of Wales. King Edward I fought Welsh prince Llywelyn ap Gruffudd and he was killed in 1282. In 1284, the Statute of Rhuddlan made Wales part of England. England and Wales made a formal union in 1536.

1296: Edward I invaded Scotland. A year later, a man called William Wallace tried to fight the English. Scottish king Robert the Bruce defeated the English at the Battle of Bannockburn in 1314. Scotland became independent in 1328.

1315: The Great Famine. Over 7 years, at least 10% of people across Britain died from starvation caused by 2 years of very bad weather.

1348: The Black Death. Bubonic plague killed 40% of people in one year. Many villages disappeared. But because of a labour shortage, the remaining peasants could suddenly choose who to work for and what to do. There was big social change.

1381: The Peasants’ Revolt. Thousands of peasants protested in London because they wanted equal rights and did not want to pay a new tax. Eventually wool exports were taxed instead.

1400: The Welsh Revolt: a member of the Welsh royalty, Owain Glyndwr, led the Welsh to revolt against the new English king, Henry IV. At first it seemed like he was successful, but eventually the English took back control.

1450s: The Wars of the Roses. When King Henry VI became too ill to rule, Richard, Duke of York was asked to take over temporarily. However, he didn’t want to stop being ruler even when the king was better. This started a 30-year war between two sides of the English royal Plantagenet family: the House of York (which had a white rose logo) and the House of Lancaster (red rose logo).

1485: The start of the Tudor dynasty. Henry Tudor of the House of Lancaster won the Battle of Bosworth Field and became King Henry VII. To stop the fighting of the previous 30 years, he married his rival’s niece, Elizabeth of York. Henry then created the House of Tudor (with a red and white rose logo). England and Wales entered a time of relative peace and growing wealth.

1534: The Reformation. Catholic King Henry VIII wanted to divorce his wife because she had not had a son. But divorce was forbidden by the Pope. So Henry made himself the head of a new church, the Church of England (Protestant). This led to many years of Catholic-Protestant fighting. Henry VIII is famous now for having six wives. He also executed over 50,000 people.

1536: Dissolution of the monasteries. King Henry VIII took the wealth and power from English Catholic monasteries.

1559: Queen Elizabeth I crowned. She was a Protestant queen who ruled for 44 years. It was a time of great wealth for the country, although many thousands are made homeless because of changes in land use.

1588: The Armada. A group of ships from Spain tried to invade England. They were defeated.

1592: Scottish parliament becomes Presbyterian. This is a type of Protestant Christianity, influenced by the teachings of John Calvin.

1603: The start of the Stuart dynasty. King James VI of Scotland was a close relation of the English Queen Elizabeth I. He was crowned as James I of England after her death because she has no children. It brought the two nations together (uneasily).

1642: The Civil War started. King Charles I was not a good leader and wanted money for a war with Scotland. Parliament did not want to help him. People who supported the king (Cavaliers) fought people who supported Parliament (Roundheads). About 10% of the population died in the fighting.

1649: Britain became a republic (called ‘the Commonwealth’). King Charles I had his head cut off. A military leader called Oliver Cromwell took control. He became a dictator.

1660: The Restoration of the Monarchy. Cromwell died in 1658 and his son Richard took over. He was not a good leader. Charles I’s son was invited back to the country to be King Charles II.

1665: The Great Plague of London. About 20% of London’s population died of bubonic plague.

1666: The Great Fire of London. A fire that started in a bakery destroyed 80% of the city.

1689: The Glorious Revolution. King James II (King Charles II’s brother) was unpopular – and Catholic. He fled abroad after William of Orange (the husband of his Protestant daughter Mary) came with an army. Mary and William became joint monarchs, known as William III and Mary.

1692: The Glencoe Massacre. Catholics in Scotland were told to swear their support of the new king William III (a Protestant) by January 1, 1692. The chief of the MacDonald clan did it too late. In return, 34 men, 2 women and 2 children were killed by soldiers of the Earl of Argyll on the orders of the king.

1707: Great Britain is created. The Treaty of Union between Scotland and England United Kingdom of Great Britain was made, with a British parliament in Westminster.

1714: The start of the Georgian era. Queen Anne died and her nearest Protestant relative became the new king, George I. He was from Germany. This was the start of a time of great wealth and colonial expansion.

1715: First Jacobite Rebellion. Catholics who wanted James II of England back on the throne (called Jacobites) fought Protestants who supported the new king George I. The fighting ended when the grandson of James II (known as ‘Bonnie Prince Charlie’) lost the Battle of Culloden in 1746.

1720: South Sea Bubble. Thousands of people went bankrupt and many took their own life when the price of shares in the South Sea Company collapsed.

1780s: The Highland Clearances. Over 100 years, people in Highland Scotland were forced from their villages and farms so the land could be used for sheep. Thousands of people emigrated, many to Ireland or North America.

1801: The UK is created. Because of the Irish rebellion, Britain dissolved the Irish parliament and moved its responsibilities to the British parliament. This created the United Kingdom of Great Britain and Ireland.

1825: The first passenger railway is built. It goes between Stockton and Darlington. Soon there were railways nearly everywhere. Many were shut in the 1960s.

1834: Abolishment of slavery. Slavery becomes illegal across most of the British Empire after a new law is passed. There was a transitional period that lasted until 1838. Some areas had to wait until 1843: St Helena, Ceylon (now Sri Lanka) and places in India controlled by the East India Company. A new system of ‘indentured labourers’ was introduced to replace slavery; for many people it was not much better.

1837: The start of the Victorian era. During the reign of Queen Victoria, the British Empire grew until it had a population of over 400 million people. It included countries like India, Australia and much of Africa. Most of these countries are now independent.

1845-50: Irish Potato Famine. Over 1 million people died and about 1 million emigrated when a disease destroyed potatoes, the only food of the poor. During this time, many other foods were grown and sent to Britain. This made Ireland even more determined to become independent.

1851: The Great Exhibition. This trade fair in London showed 100,000 of the most amazing objects from the British Empire. It was held in a very big glass building called the ‘Crystal Palace’ and was visited by 6 million people, including Queen Victoria.

1901: The start of the Edwardian era. After Queen Victoria’s death, her son became King Edward VII. He died in 1910, but the ‘Edwardian era’ is often considered to last until 1914. Britain changed a lot after World War 1, so the Edwardian era marks the last days of the British Empire and the social system of large country houses and servants.

1903: The Suffragettes. For 11 years, women from the Women’s Political and Social Union (called ‘Suffragettes’) fought for women to get the vote. After World War I, women over 30 who own property are allowed to vote. In 1928, everyone over 21 was allowed to vote.

1914–18: World War 1. The war brought social change because women had to do the jobs of the men while they were fighting. Men from many other countries also helped Britain as part of the Allied Powers.

1921: The Catholic southern part of Ireland declared independence from Britain. It became a republic in 1949. Six mainly Protestant counties in the north stayed with Britain and became Northern Ireland (sometimes called ‘Ulster’). Protestants were usually of English or Scottish descent, while Catholics were usually of Irish descent. The impact is still felt today.

1948: The Windrush generation. People from the West Indies were invited to help Britain rebuild after the war or work in the NHS. Over the next decades, workers were invited from many other countries (including India, Pakistan and Bangladesh).

1951: Festival of Britain. An exhibition in London that celebrated British industry, art and science.

1966: England wins the football World Cup. They won 4-2 against Germany.

1973: The Three-Day Week. Strikes by coal miners meant there was not enough fuel for power stations. For two months, companies could only use electricity three days a week.

1973: Britain joined the EEC. It was an early version of the European Union.

1981: Brixton Riots. There were riots in London and some other cities in reponse to racism by police.

1992: The Channel Tunnel opens. It links UK to France by road and rail.

1997: Death of Princess Diana. The Princess was much loved by the public, so her death at such a young age upset many people.

2012: Queen’s Diamond Jubilee. There were celebrations because Queen Elizabeth had been queen for 60 years. London also hosted the Olympic Games.

2016: Brexit vote. 52% of the UK voted to leave the European Union (though in London, Scotland and Northern Ireland most people wanted to stay). 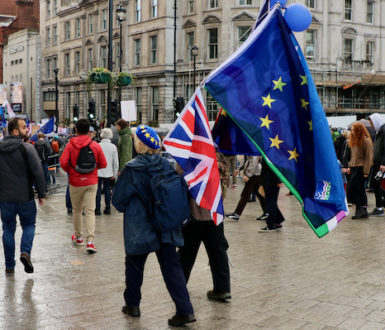 Why did Brexit happen?

Why there are so many country houses