How to date your home or apartment

It is always interesting to date the age of your home because it gives an insight into the past. In general, the look and design reflects the fashion, economy and needs of that time. This includes the size and arrangement of different rooms.

Of course, changes are often made to modernise a property – especially on the inside, where people might have knocked walls down or got rid of original features. However, the front of a building usually changes less and is a good place to look for clues about when your home was built.

Before about 1750
Houses were usually small, with low ceilings and doors because people were not so tall. They were built with whatever was available locally. In some areas, this was stone or brick, in other areas it was a wooden frame filled with brick, stone or painted plaster (this style is called ‘half timbered’, an example is shown below left). There were often large wooden beams visible inside the house. Roofs were thatched with reeds/straw or used thin layers of stone, slate or clay tiles. Glass was very expensive, so windows were small. These old houses are often called ‘cottages’. Larger houses were rare because so few people were wealthy enough to build them.
Look for: small windows in random places, tiny panes of glass, exposed wood 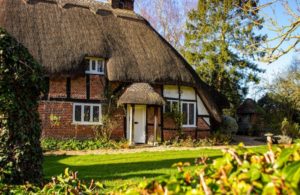 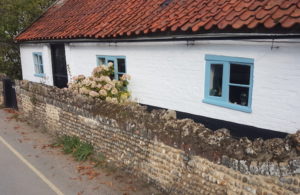 About 1750-1860
Houses started to be of a higher quality than earlier times. They were usually in rows (called ‘terraces’) made of stone or brick, with evenly spaced windows. Roofs were made of slate or tiles. Bigger houses were not usually much wider than smaller ones, they were just taller and had more floors. Houses usually looked quite plain and simple, but sometimes they had decorative details copied from rich people’s mansions of the time. This included ‘medieval church style’, called Gothic (arches, carved stonework) and ‘Ancient Greek temple style’, called Palladian (fake columns with a triangle on top) – a look that continues to be popular, even now.
Look for: Windows all of the same width, arched windows or doors 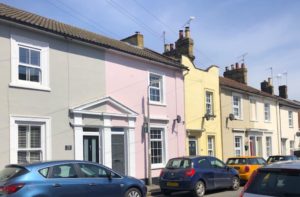 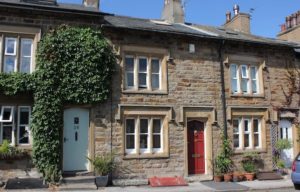 About 1860-1920
New methods of production and transport meant there were many building materials to choose from: coloured bricks, shaped bricks or roof tiles, decorative woodwork, iron railings, stained glass and moulded decorations. Even small houses might have quite a few decorative details. These copied a wide variety of styles – or even a strange mix of styles (people were not afraid to experiment). You can find houses with decorative influences from castles, cottages, churches, Greek temples, Art Nouveau or houses from other countries, including the Netherlands, Italy and Japan. People wanted more light and air, so windows in main rooms were really large. There were a few city apartment blocks, but mostly people lived in houses.
Look for: Lots of decorative details inside and outside. Main rooms often have a really big window that sticks out at the front (called a ‘bay window’). 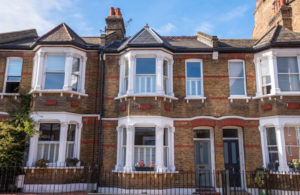 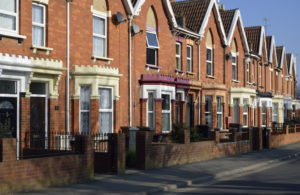 About 1920-1940
Social changes after World War 1 meant more people could buy their own home. Millions of houses with gardens were built in city suburbs and towns. Houses were no longer built in rows – it was more common for them to be ‘semi-detached’ (joined to just 1 other house). More apartments were built too, usually in buildings no higher than 3 or 4 floors, often with shops underneath. Some homes had a bit of Art Deco styling or were influenced by a craze for Egypt after the discovery of Tutankhamun’s tomb in 1922. However, the most popular style was ‘Mock Tudor’, a fake rustic look made using pebbledash (a textured surface of small stones in concrete) with ‘half-timbered’ panels above the main windows. This Mock Tudor style was first seen in about 1900, but the 1920-1940 versions usually don’t have as many decorative details.
Look for: bay windows, ‘half timbered’ detailing, curved brick entrance porch, semi-detached 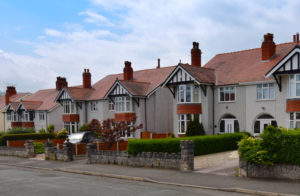 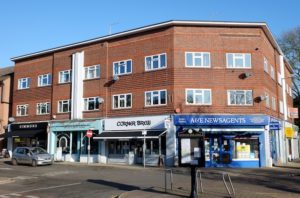 About 1945-1980
Many areas within British cities were destroyed during World War 2 and the country was very poor. New homes were needed quickly and cheaply. While cities were rebuilt, thousands of people were moved to towns. Tall apartment blocks (known as tower blocks) became common, usually in Modernist style using concrete or brick. People wanted a total break with the past, so previous housing styles became unfashionable and many older buildings were demolished – even those that were not damaged during the war. Architects and builders experimented with house design, which often meant windows had odd shapes or were put in strange places. Overall, houses were very plain and had lots of straight lines and little decoration.
Look for: Concrete, coloured panels beneath windows, windows in random places, few decorative details 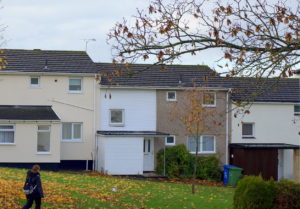 1980-now
People started to think concrete was ugly and wanted homes that looked like older styles, especially the sort of random mix you might find in a village. Sometimes it can be difficult to see these houses are modern, but there will be clues – like integral garages, few decorative elements on the inside, or a lack of chimneys. To minimise traffic, roads on modern housing estates are not usually straight and often do not go anywhere. Within city apartments and larger buildings, architects experiment with curvy shapes and new materials like glass and steel to create homes with a touch of hotel-style glamour.
Look for: Windows of different shapes. A mix of designs on the same street. Road names including ‘Way’ or ‘Drive’ are common. Apartments usually built of mixed materials. 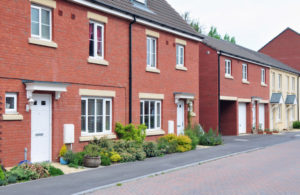 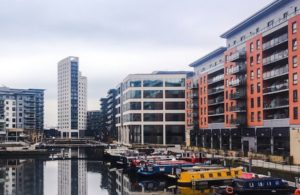 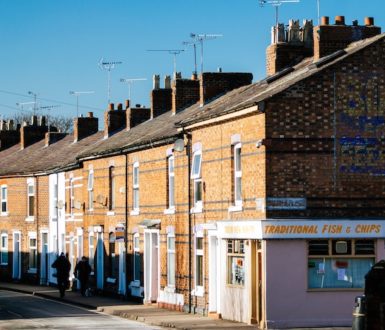 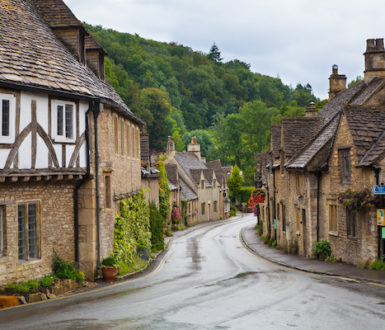 Why this isn't a typical English village 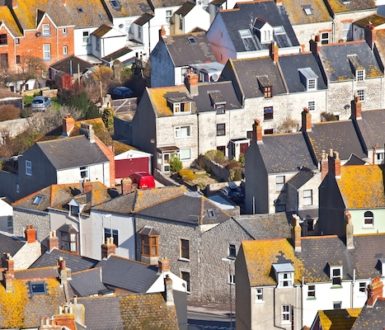