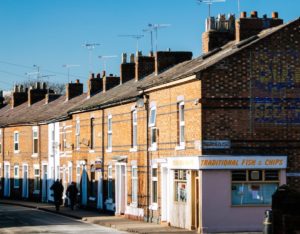 Most cities worldwide have apartments in the centre and houses in the suburbs. However, one striking thing about English and Welsh (but not Scottish) towns and cities is the rows of identical small houses, even in the centre. These are known as ‘terraced’ houses – and the reasons why there are so many are both social and economic.

The word ‘terraced’ comes from the earliest example, Adelphi Terrace in London (1769, demolished 1935). This building had a terrace outside where residents could walk overlooking the Thames river. Adelphi Terrace looked like a palace, but was actually a row of houses side by side. The idea of living in a palace (or at least, a small slice of a palace) was popular. Most early terraced housing was designed look like one large grand building.

In the 1700s, London had grown out of its city walls and into the surrounding land. The countryside was divided up into large areas called ‘estates’, owned by aristocratic families. These landowners noticed a new way to make money: building houses to rent. However, there was competition from other landowners, so they had to create properties that people wanted. What people wanted was a house.

The cheapest way to build houses was to link them together. Even the wealthiest people were happy to rent this type of house, rather than a villa. This was because they were usually in their countryside mansions – a city house was basically a holiday home.

Most new houses were aimed at people working in industrial or business jobs. These people had worked hard to do well and did not want to live near people lower on the wealth scale. Whole streets were built with houses in one of 4 or 5 grades. The grading affected the number and size of rooms, plus extras like halls, basements, or land front or back.

Soon the rest of the country followed London’s example. In some places, landowners built factories and houses (sometimes whole towns) for their workers. Building cheaply and quickly could result in street after street of completely identical homes. Terraced houses were perfect for the fast-expanding cities and towns. For example, Cardiff in Wales grew from 1,800 to 164,000 people between 1801 and 1901. During that time, the population of England and Wales as a whole grew from 10.9 million (in 1.8 million houses) to 32 million people (in 6.2 million houses). The result was that by 1901, 85% of people lived in a terraced house (although this wasn’t always one family in one house; poorer families would share).

Gradually, fashions changed and homes became more individual. Apartment blocks started to be built in the centre of towns and cities, and detached or semi-detached houses in the suburbs. This was because of social changes after World War 1, rising land values and a desire for more privacy (by those who could afford it). However, the old terraced houses remain popular even now, because they are usually well built, relatively spacious and have interesting historical features. 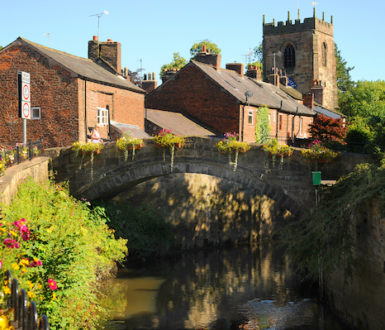